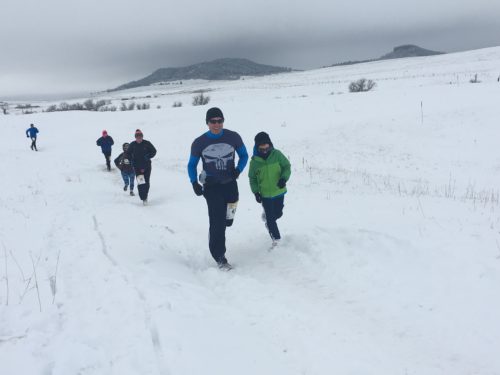 Months ago my 9 year old son told me that he’d like to do a “challenging race” with me.  Both my sons have run 5K’s and other shorter distance races and have seen me complete some difficult races over the years so it wasn’t too shocking that he’d ask.  Since he’d never run more than 3 miles in his life, I signed  us up for an 8 mile trail race at the end of April.  We did a few training runs to build his confidence and as the day approached I envisioned a nice day of sunshine and trail running with my boy.  The one factor we didn’t consider was that this was April in Colorado.  48 hours before the race it began to snow and it continued on and off until race time.  Our race ended up being 8 miles through 9 inches of snow, 25 mile per hour winds and 20 degree temperatures.  Though to many that would understandably sound miserable it turned out to be an amazing day.  When I crossed the finish line with my son I had tears of pride at his accomplishment.  Watching him compete in the elements also reminded me of certain life lessons that I hold dear.  Today I’d like to share a few of those with you.

This site uses Akismet to reduce spam. Learn how your comment data is processed.

This message is only visible to admins.

We would love to hear what you think - Review us!