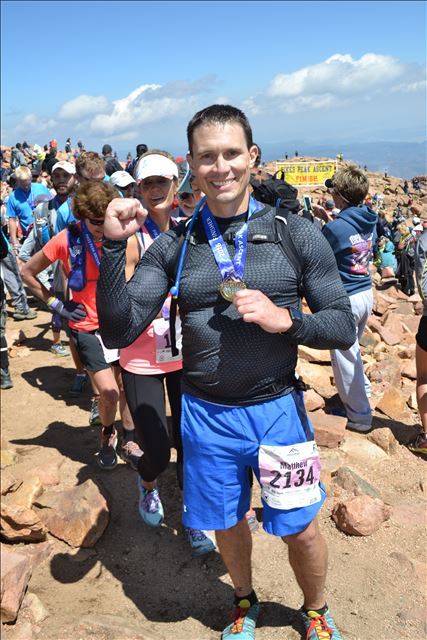 2,076.  Out of just over 2100 people, that’s where I was predicted to finish in my race by the “race predictor.”   For someone that is extremely competitive and has tackled some very challenging races throughout the years this was very humbling.

The race to which I’m referring is known as the Pikes Peak Ascent which is slightly more than a half marathon distance although more challenging than any marathon you’ll find. It begins at about 6,000 feet above sea level and after 13.3 miles and 8,000 feet of elevation gain over rocks and rough terrain eventually delivers you to the top of Pikes Peak, one of Colorado’s famous “14ers.”  I competed in this event for the first time last year and with 4 miles to go got altitude sickness – which both literally and figuratively made my race extremely ugly (here’s a LINK to my blog from last year about overcoming it – http://newbodychiro.com/2015/08/).  Based on that performance I was seeded 2,076 this year.

Since I crossed the finish line last year resembling something out of The Walking Dead, I’ve been anxious to attempt it again.  However, as the race grew closer it began to appeal to me for reasons other than just completing it again.  I saw this race as a metaphor for a specific time in my life.  A few years ago I moved across country with my family to a state where I knew no one and had to start over in my career.  Within months I was divorced, living in a small apartment, had little money and had to adjust to only seeing the loves of my life – my two young boys only 3-4 days per week.  As challenging as that was, I made the decision from the start to never complain, to never quit and always keep moving forward.  As difficult as things were, I saw it as an opportunity to reinvent myself.  Years later I am now a business owner, financially stable, have a nice home, am engaged to an amazing woman and have a closer relationship to my boys than ever before.   I transformed difficult times into a life far greater than I’d ever experienced.  In other words, I made a comeback.

As I lined up for the race in the 21st (and final) group of runners this past weekend I thought back to those times and embraced the strength it gave me.  Not only did it motivate me at race time but it made me train harder and smarter in the months and weeks leading up to that moment.  I was blessed because my failures motivated me, gave me passion and there I stood with an opportunity to earn a new outcome.  I even took it as a sign when the night before the race my 9 year old gave me his advice “Daddy keep reeling them in (passing other runners) and stay hungry!”  Those words were profound to me and exactly what I needed to hear.  Throughout the race I repeated them in my head hundreds of times and I did exactly as he told me.

In the end, the race was one I consider my best ever and of which I am the most proud.  I didn’t win; in fact I wasn’t even close (or even close to being close) to winning.  However, I came from dead last at the beginning and finished in the top 50%.  Just as my son told me, I reeled people in and stayed hungry for 4 hours and 43 minutes and finished 90 minutes faster than I did the previous year.  I gave every ounce of effort I could while embracing all the fatigue and challenge the race presented me.  As the elevation got higher and the miles got exponentially tougher I became even more determined to prove to myself what I could achieve.  It was very similar to how things had gone for me a few years back in my personal life – start from scratch, keep moving forward and eventually create a greater outcome.

One of the things I will always remember about the race is finishing the last ½ mile with a group of about 5 people.  The closer we got to the top the more emotional it became.  As I crossed the finish line the woman behind me grabbed my arm, smiled and while crying said “we did it!”  This was another reminder to me of how after we’ve endured pain or disappointment, how amazing it feels to attain a personal victory.  At the top of the mountain I had an hour to enjoy the amazing views and reflect.  I felt blessed to have experienced in that race what I had in life – the satisfying feeling of a great comeback!

This site uses Akismet to reduce spam. Learn how your comment data is processed.

This message is only visible to admins.

Error: An access token is required to request this resource.
Type: OAuthException
Solution: See here for how to solve this error

We would love to hear what you think - Review us!